Here in this Guide we will Compare OneDrive vs Google Drive on Basis of Speed, Availability, Security, Sharing and More. 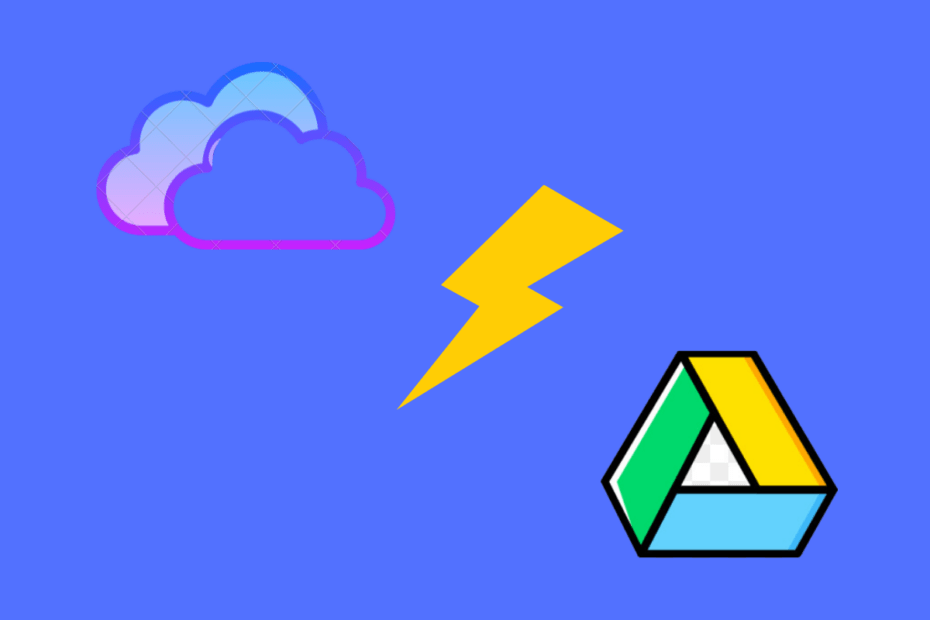 Cloud storage technology has received a lot of significant updates over the last few years. It has become the go-to platform for businesses to put their TBs of data online. From security to collaboration tools, there are many aspects in which the centralized cloud storage services have the upper hand over the localized hardware.

Among the long list of online options, Google Drive and Microsoft OneDrive are two of the most popular cloud storage platforms. They both offer robust security, good bandwidth, and, probably the most critical, ample amount of storage. Furthermore, they also boast an easy-to-use interface and 24×7 customer support. But which among these two should you go with to cover all your business needs?

If you also have the same doubt, then this is the post where you need to be. Here, we are going to make a detailed comparison between Google Drive and OneDrive. We will be listing all the pros and cons of both these cloud services so that it becomes easy for you to make your decision on which one you should settle for.

Nowadays, most of us want a quick and to-the-point comparison between services. Nobody loves to go through long boring paragraphs. And if you are also part of that group, then here’s a tabular comparison between Google Drive and Microsoft OneDrive. But in case if you have any queries regarding any of the below-mentioned points, then we recommend going through detailed comparisons that follow the tabular data. 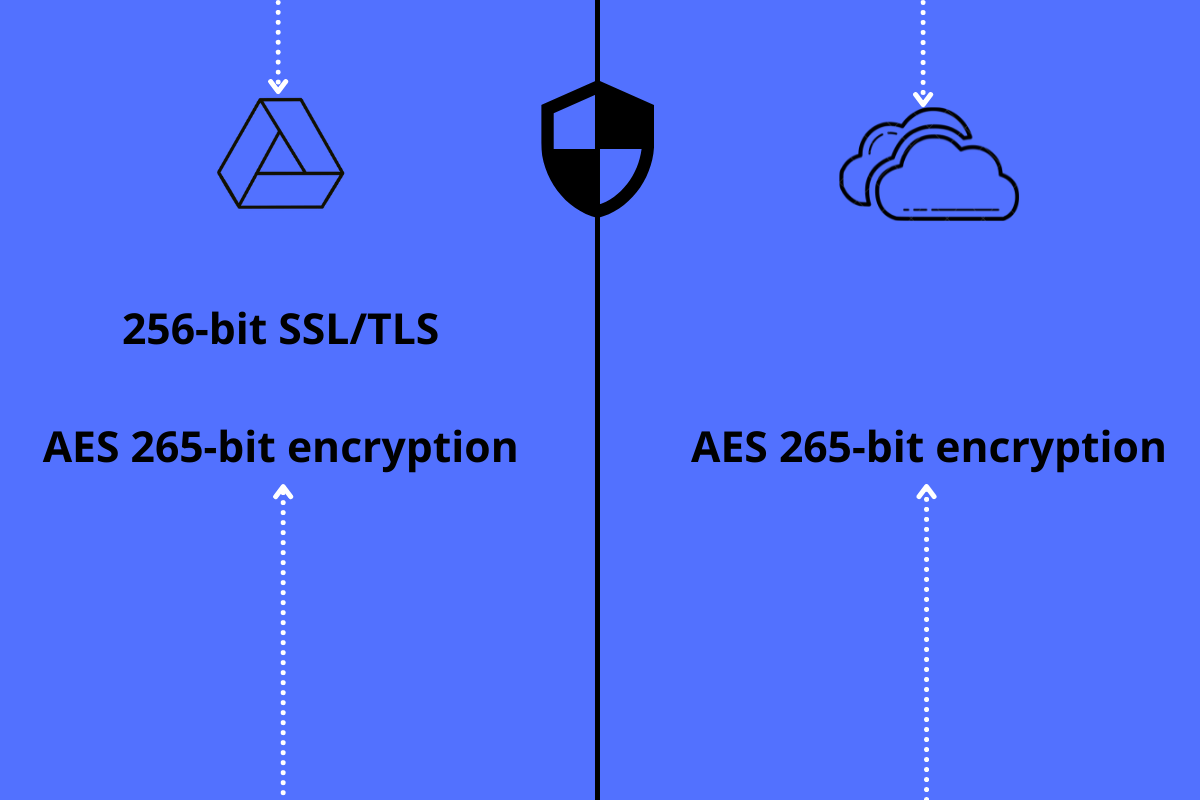 One of the greatest downsides of both OneDrive and Google Drive is that neither of them currently has the most important security feature, end-to-end encryption. So, anyone in your team who has access to the encryption key can easily manage files and folders. Furthermore, the unavailability of end-to-end encryption indicates that anyone who somehow manages to infringe the security protocol of Google Drive and OneDrive can easily access your files.

So, instead of end-to-end encryption, Google Drive relies on 256-bit SSL/TLS encryption for files uploading, downloading, or even accessing by anyone. And files that are stored and are at rest are protected by 128-bit AES keys.

You also get the support of two-factor authentication in both the cloud storage. It means that everyone who is trying to access the data will have to go through some extra steps like entering the OTP or facial recognition.

Feature-wise, it’s tough to differentiate OneDrive and Google Drive. To be specific, they both offer almost identical features across the board. Therefore, we will have to get into the technical aspects to find a winner between these two cloud storage.

In terms of accessibility, both the cloud storage are easily accessible from different platforms, including Windows, macOS, and Android. However, ChromeOS users prefer to go with Google Drive because of its seamless integration with all the Google products.

Searching and managing files are equally good on both Google Drive and OneDrive. But again, Google has the edge over Microsoft because of its built-in search engine. It quickly picks up the file type and assigns it to a dedicated Google application. For instance, if there is a Docs file, then it will be assigned to Google Docs.

It’s again a draw between Google Drive and OneDrive when it comes to sharing documents with others. On both, you can share the link to a file. Or, you can add the other person’s email address to directly permit him to access the file.

OneDrive has an edge over Google Drive, in terms of granting permission of what can be done to a shared file. Compared to just 3 options offered by Google, Microsoft offers 33 different types of permissions. Although it can be complicated for regular users, at the same time, it increases the flexibility of big businesses.

In terms of synching data, OneDrive again has the upper hand over Google Drive as it uses block-level copying Technology. It means, in time of any editing, instead of re-uploading the whole document, OneDrive just re-upload the edited part. This technology becomes more useful while editing large documents. However, this feature only works on Microsoft native apps, which include MS Word and MS Excel.

As it is quite obvious, OneDrive is specially designed for Windows operating systems. And you can access it just by heading towards the start menu of the Windows OS. But when it comes to its accessibility in other operating systems, it is accessible via its web app, which is where its performance falls.

Compared to Google Drive, the speed of the Microsoft OneDrive web app is a bit on the lower side. Microsoft has announced that major updates are coming in its web app, so let’s wait and see whether it eliminates the current issues or not.

On the other hand, Google Drive is a dedicated web app. Therefore, its performance is top-notch and equally well in all the operating systems. Furthermore, its intuitive interface ensures that Google Drive wins the one-on-one battle with OneDrive.

The downloadable clients of both Google Drive and OneDrive ensure that you can easily sync your files and folders directly to the cloud via your system. These clients take very minimal space of your system’s memory, and process data very quickly.

As mentioned, Google Drive is totally web-based and is accessed via an Internet browser. But on the other hand, OneDrive requires you to install a couple of applications to enjoy its complete service.

It’s important to have cloud storage that offers more backup options and easy data syncing. So, let’s check out what Google Drive and OneDrive have to offer, in terms of mobile backup and data syncing.

While backing up images and videos, you get the access to choose the quality of the backup file. This feature ensures that you can easily manage the cloud storage space. 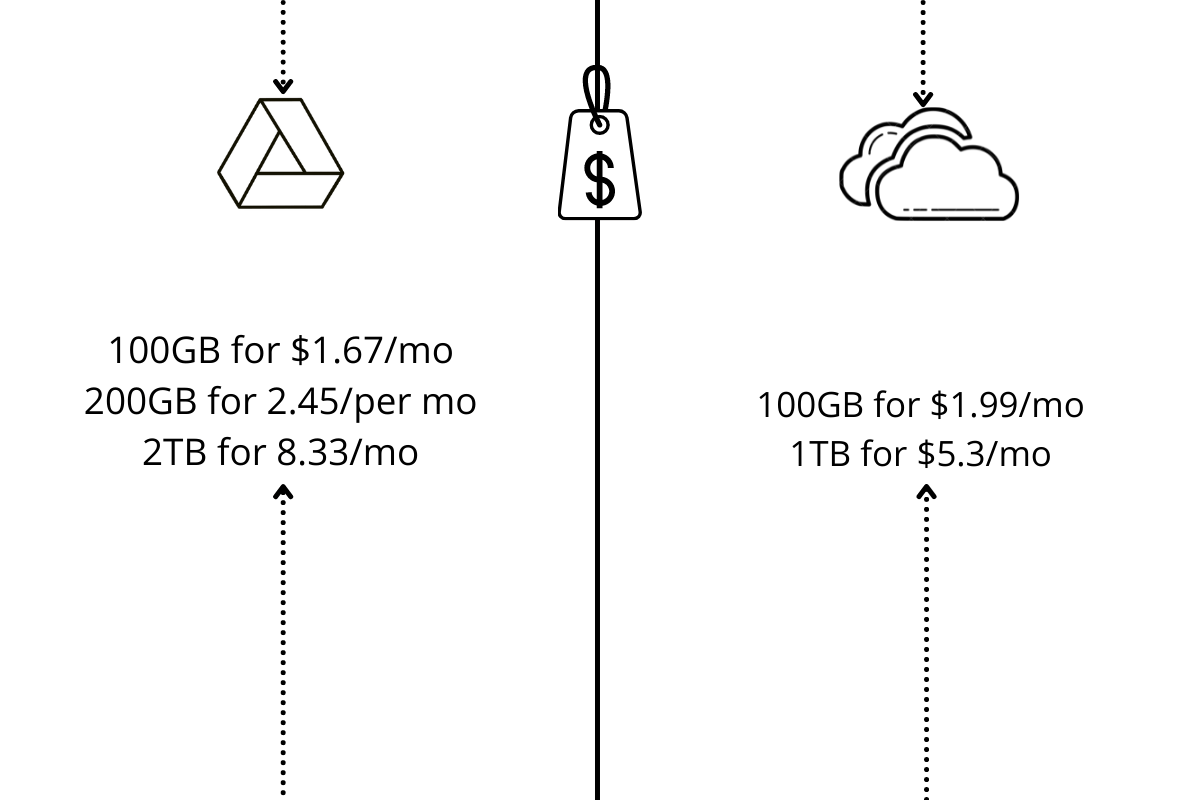 Microsoft OneDrive offers only 5 GB of free storage. The free version has also been restricted to a certain number of features and has only been given access to 3 files for your personal vault. On the other hand, Google Drive offers 15 GB of free storage. And most importantly, unlike OneDrive, its free version doesn’t have any feature limitations.

With a Microsoft OneDrive subscription, along with additional storage and features, you get access to other Microsoft apps as well. However, there’s just one subscription plan available for OneDrive, i.e., 100GB for $1.99/month. Plus, this plan doesn’t come along with other Office apps. You’ll have to go with the Microsoft 365 plan if your need is more than 100 GB.

If you don’t need the other Microsoft apps that come with the OneDrive subscription, you can go with the business plans. To be precise, there are two OneDrive business packages. But among them, the essential business plan is preferred by most users. It costs $5/month and comes along with critical business-related apps like Microsoft Teams and SharePoint. Not to mention the 1 TB of storage that it offers to each person associated with the plan.

Google Drive is comparatively way cheaper than Microsoft OneDrive. And most importantly, unlike OneDrive, you don’t need any additional editing Microsoft applications like Microsoft Word to edit Google Drive documents.

Similar to Microsoft OneDrive, you will have to pay a subscription fee in order to increase the storage. There are three different subscription plans to choose from, 100GB for $1.67/month, 200GB for 2.45/per month, and 2TB for 8.33/month. Furthermore, you can share each subscription plan with 5 people.

File recovery is another important aspect that you must consider before choosing cloud storage for your business. So, here’s a detailed comparison between Google Drive and OneDrive based on file recovery and history they keep.

Microsoft OneDrive also offers 30 days of file recovery. But unlike Google Drive, the limit is for both native and non-native files. For restoring, just right-click on a file and then click on the advanced menu option. Here you will find all the prior versions of that particular file. Just select any of the versions to restore it.

OneDrive vs. Google Drive: Which One Should You Choose?

Google Drive and Microsoft OneDrive are both equally well for businesses that greatly depend on file sharing and document collaborations. From smooth performance to affordable storage options, it’s almost impossible to choose a clear-cut winner between these two cloud storage options. And according to us, it will become easy to decide by comparing these cloud storage options with the current Office suite on which your business works.

For instance, if your work revolves around Google Workspace and Microsoft Office, Google Drive can be an ideal option for you. Its seamless performance and easy-to-use interface make it easy for you and your team to work in collaboration together. Furthermore, the upcoming updates on Google Drive reflect a bright future for cloud storage in terms of security. It will also give you more access to your files and who can access them.

On the other hand, if you and your team have developed a habit of using the Microsoft Office suite, then OneDrive can be the go-to option for you. It is a consistent and value-for-money cloud storage option. The interface is intuitive and easy to use as well if you have been using Microsoft software for a long time.

Overall, as we mentioned, it’s almost impossible to choose a winner between Google Drive and Microsoft OneDrive based on the features they offer. It all comes down to which one fulfills your needs the most. So, let us know in the comment section which one of these cloud storage options you will choose to run your business successfully.